In order to observe surface details on the Moon, you should mount your binoculars on a tripod, only then will you have a good chance to see some of the smaller craters. Most prominent are the lunar maria. They are extensive plains that are flooded with lava. The last lava outbursts occurred about a billion years ago, so there are many less craters than on the higher plateaus, which are four times older.

The craters are not volcanic, but impact craters created from meteorites. There is no erosion by wind or water on the Moon, so even the smallest craters are preserved. In many of the larger craters with diameters of sometimes more than 60 miles (100 kilometers) are central mountains, which were created by the impact. Starting from some craters, there are also bright ray systems. Mountain ranges, valleys, rills (grooves) and crater chains complete the picture.

On the image of the full Moon above some of the most striking and interesting features are highlighted, which are described in more detail below. Uppercase letters denote the lunar maria, the craters are numbered and other formations are marked with letters.

On the Moon, as we see it in the sky, north is on the upper side and west is left. This distribution of directions was established in 1961 by the International Astronomical Union. 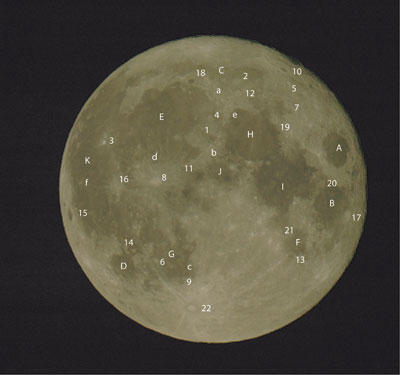 Buy Paperback or EBook on Amazon

Starry Sky for Binoculars is available as paperback and as DRM-free EBook on Amazon.

Sport Optics by Alan Hale from Hale Optics is an excellent guide for purchasing and using binoculars, spotting scopes or rifle scopes. It really helps you to find the perfect instrument for you. It is avaiable as ebook and printed book from Amazon and as ebook from other ebook-publishers.